Two Zippered Pouches: One for an Innotab2 and one for food

In six sleeps we will wake up earlier than the sun and hopefully be out our door, on the road to the airport, by about 6:30. We have a nearly two hour drive to the airport then we hop on our first flight that will take us to Washington. Then the fun beings as we board plane #2 and arrive in Seattle, WA 6 hours later. We'll grab a hotel and then be on the Clipper the next morning.

I'm not really looking forward to this trip. I'm worried that I won't get any sleep and I'll get glared down by my MIL more times than I'm comfortable with. On the other side of that, I'm hoping I'll grow up enough to just let go without putting negative expectations on it and try to enjoy myself while my kids get to spend some time with their grandparents and aunt and uncle. Sweet One is absolutely, completely excited about this trip. Yesterday after Preschool her teacher told me she was a little out of sorts because she was so excited. This is the first time we've ever been told she was out of sorts by her teacher.

So for the past few weeks I've been trying to figure out a way to keep our packing as minimal as possible. Since we need to hop on public transit to get to the hotel we are hoping to only take one real suitcase, a purse and bag for me and one backpack per kid.

In terms of entertaining the kids, I have loaded up a number of movies onto a couple of SD cards so that they can watch them with Sweet One's Innotab2. The fact that I can use an SD was one reason I chose it over its competitor. She got it from her grandparents for Christmas and I'm hoping it will save our sanity this trip. One problem in terms of trying to pack light is that the case I bought for it is rather large and would take up pretty much her whole backpack. So I searched and found this tutorial at So Sew Something! and figured that I could add a few pockets and padding to make it work for the Innotab2. 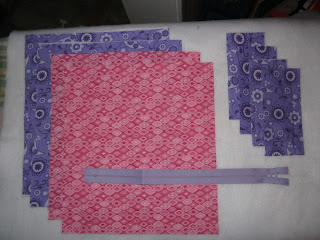 To make the pockets I took one piece with fleece and one without, put the right sides together and sewed around 3 sides. Then I flipped them right side out, turned in the bottom edges and sewed it up shut. 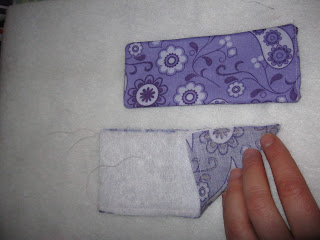 Then I eyeballed it and sewed one pocket on each piece of the lining fabric. (My thinking was that the pockets would be opposite each other and then hopefully the Innotab2 would sit in between them somewhat.) 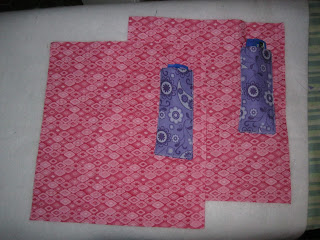 From this point on I just did as the tutorial at So Sew Something! instructed and it came together very quickly. 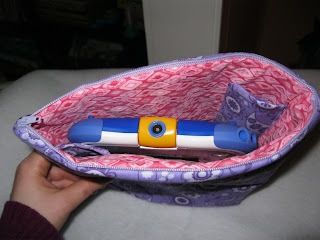 It ended up a little wider than it needed to but it is not nearly as thick as the other case. Sweet One will love it because I made it out of her "absolutely favorite colors!" (Anyone else's kid in love with Charlie and Lola?) The pockets each hold two game cartridges and slide in very nicely. While we can't reach down into them to get the bottom cartridge, they slide out very easily by placing a finger at the bottom of the cartrdige and pushing it up and out.

A few days ago I had actually made one other pouch with the same tutorial. Before putting it together, I basted on a piece of Insul-Bright to each of the outer fabric pieces. Then I continued on as the tutorial told me to and I now have a pouch that will keep some portable yogurt and cheese sticks cool since we'll be in the air for both lunch and supper! 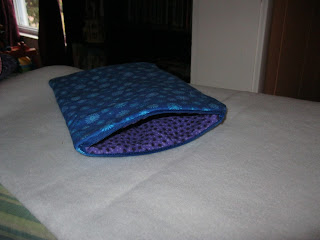 In the end, if all my efforts to entertain the kids and keep them fed still leaves them with the urge to scream at the top of their lungs for much too long, I'll never have to see anybody on the plane again! And I've also heard that it goes a long way to buy the person in front of us a drink or snack pack if our kids are kicking their seats a bit too much.
Posted by ste at 2:05 PM 1 comment:

ste
I moved to a small town in 2006 where people thrive on knowing everybody's business and kindred spirits are as hard to find as a good haircut. I am married to a man who, despite his tall and skinny frame, shows me a love so big that keeps on growing. Our daughter was born in January 2009 and our "Little Man" joined us the first day of April 2011. Being called Mommy makes my skin crawl - I much prefer Mama or Mum. Constantly hoping Sweet One won't wake up too early, we are learning what each day with two kids is all about. I love coffee and going to matinees. I watch too much tv. I've been told that I "think too much" and so with my heart on my sleeve, I come to this page hoping to clear my head and make sense of myself, this place and my life.

1. Eat a macaron
2. Go on girl's trip
3. Go back to New Orlean's without kids
4. Live in a city again
5. Swim with dolphins
6. Learn to bake cheesecake - well.
7. Learn to bake tasty pies.
8. Go to New York
9. See a Broadway Show
10. See Kristen Chenoweth Live
11. Eat a fish/shrimp taco
12. Visit San Francisco
13. Have a beach vacation at one of those beach houses you see on tv/the movies.
14. Go to Crate and Barrel - not just online, an actual store.
15. If I'm going to continue living in the states, I'd like to live somewhere that has a Trader Joe's. With wine. Because in this state they don't have wine.

Indian Horse by Richard Wagamese
Flygirl by Sherri L. Smith
Orphan Train by Christina Baker Kline
Lamb: The Gospel According to Biff, Christ's Childhood Pal by Christopher Moore
The Poisonwood Bible by Barbara Kingsolver
Great House by Nicole Krauss
The Twin by Gerbrand Bakker
Falling Backwards by Jann Arden
All That Matters by Wayson Choy
The Virgin Cure by Ami McKay
Happier at Home by Gretchen Rubin
Wishin' and Hopin' by Wally Lamb
Toby: A Man by Todd Babiak
The Sentimentalists by Johanna Skibsrud
Annabel by Kathleen Winter
The Bishop's Man by Linden MacIntyre
After Green Gables: L.M. Montgomery's Letters to Ephraim Weber, 1916-1941
The Jade Peony by Wayson Choy
Room by Emma Donoghue
Cool Water by Dianne Warren
The Hour I First Believed by Wally Lamb (My Dad had just started it before he died.)
February by Lisa Moore
The Last Time They Met by Anita Shreve
After the Falls by Catherine Gildiner
Mistress Pat by LM Montgomery
Pat of Silverbush by LM Montgomery
A Death in the Family by James Agee
The Book of Negroes by Lawrence Hill
Too Close to the Falls by Catherine Gildiner
The Franchise Affair by Josephine Tey
Through Black Spruce by Joseph Boyden
Never Let Me Go by Kazuo Ishiguro
The Maytrees by Annie Dillard
The History of Love by Nichole Krauss
The Story of Forgetting by Stefan Merrill Block