Chance of a Lifetime

When I was finishing up my Bachelor's degree and thinking about the next step, my voice instructor asked me if I wanted to pursue a career in performance. I remember saying that I never wanted to be the mom who isn't home for my kid's birthday.

A dear friend of mine is offering me a chance of a lifetime. Airfare, accommodation and retreat fees covered for this! Seven nights in Puerto Vallarta with workshops where I will care for myself in a way I've only ever dreamed of.

That's almost a week and a half away from my kiddos when I've never actually left them for any real time. The only time I've been away from the house overnight was when Little Man was born! My friend had mentioned this last April when she was visiting and I told myself I'd be stupid to say no. We've called my in-laws and they are very interested to see if they could make it work so they could come and stay while I'd be away. I asked the kids over dinner last night that if I had to go somewhere for a little bit with my friend, would they like to have Gramma and Grampa come to play with them. They said yes.

But the problem is that Little Man would turn 3 while I'd be away. And that makes it so hard for me to give a firm yes. I could pretend his birthday is another day so he nor Sweet One would ever know I wasn't actually there for it. But I'd know it.
Posted by ste at 7:19 AM No comments:

A Red Dwarf Campion for my Dad

We arrived home a week ago. I've wanted to type and try to process all that happened on our two week trip that covered 3,512.1 miles but I haven't been able to. There was so much that happened. t wasn't the colossal gong show I had expected it to be. It was what it needed to be and there were many beautiful moments that I am holding onto dearly. (I'm now no longer afraid of long car trips with small kids!)

On the day that we buried my father I was surround by a family I had tried not to connect with for many years because connecting with them meant connecting with my Dad. And really, that never went the way I'd hope it would so what was the point? He didn't understand me or listen to me so why would they. But they loved me and my family. My sister and I talked about how we never felt that cared for and loved by extended family like that before. "Don't knock. This is your home while you're here. You need anything, just come in and take it or ask if you can't find it." That was what my Dad's youngest brother told me within minutes of arriving on the farm. Strangely enough, when I looked at him I saw my Dad looking at me.

My counselor told me that after we buried my father I might feel a sense of relief. But I didn't. I wanted to so desperately but it didn't come. I sat on the ground with Little Man in my lap only a few feet from the hole where the wooden box that contained the ashes would be placed. The headstone a few more feet past that. It was a short service but I cried through the whole thing. At one point the Pastor nodded to my brother who then took the box and placed it in the hole. I felt my entire torso start to shake and I thought was going to scream. I wanted to sob. I was in awe of my brother who could do that without falling down himself. I reached over and held the hand of my cousin who was sitting beside me with her son in her lap and I felt a little better. I sat there for awhile hoping that a wave of relief would come over me. My Grandma walked up to the headstone and said in a strong, even tone, "Well, goodbye my son. 'Til we meet again." I wanted to be able to say my own version of that but no matter how long I sat there, it didn't come. I think I was one of the last to leave.

For the rest of the day and the day after that we were surrounded by such a great love. I felt home in a place that I never understood. The farm was amazing. Sweet One spent hours each day running with her cousins and having the greatest time. Little Man was usually close to Big Love or I but he still had fun in his own way. We were taken out in boats, fed food and spent hours around a campfire. I thought that maybe as I was surrounded by his mother, and sister that perhaps I would start to feel a bit of peace.

I didn't want to leave the farm. I felt at home there in a way I never thought I would. We had to leave to meet with Big Love's family. My sister had left the farm a few minutes before us and it seems she had the same idea that I had. I left the kids and Big Love at the car and walked towards the grave. My sister and her family were saying good bye and so I stayed back and watched them. After they were done my sister stayed with me a bit and I tried so hard again to be able to say goodbye but I couldn't. I was scared it would never come.

A few days later as we started the five days back to where we live we stopped at the cemetery once again. This time I carried with me a Dwarf Red Campion. The kids were very excited to plant this for "Grandpa's Special Place". I felt like finally I found something I could do for him. I dug into the dirt that was filling the small hole and pulled out as much as I could to make room for this plant, threw in some food and then proceeded to plant it. The kids helped me every step of the way. We made sure the peacock feathers my niece and nephew had placed there remained standing tall, watered it so it could begin to grow and said our goodbyes. "I miss Grandpa," my Sweet One said. The four of us standing there, leaving kisses on the headstone. Together my little family helped me say my first goodbye. Finally, I felt like the first seed of peace was planted inside of me. 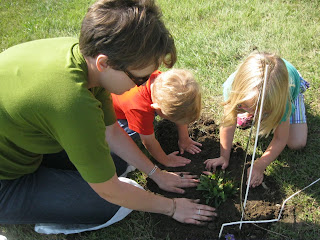 I'm not too optimistic but I really hope that little flower will bloom for my Dad every year.
Posted by ste at 10:17 PM No comments:

ste
I moved to a small town in 2006 where people thrive on knowing everybody's business and kindred spirits are as hard to find as a good haircut. I am married to a man who, despite his tall and skinny frame, shows me a love so big that keeps on growing. Our daughter was born in January 2009 and our "Little Man" joined us the first day of April 2011. Being called Mommy makes my skin crawl - I much prefer Mama or Mum. Constantly hoping Sweet One won't wake up too early, we are learning what each day with two kids is all about. I love coffee and going to matinees. I watch too much tv. I've been told that I "think too much" and so with my heart on my sleeve, I come to this page hoping to clear my head and make sense of myself, this place and my life.

1. Eat a macaron
2. Go on girl's trip
3. Go back to New Orlean's without kids
4. Live in a city again
5. Swim with dolphins
6. Learn to bake cheesecake - well.
7. Learn to bake tasty pies.
8. Go to New York
9. See a Broadway Show
10. See Kristen Chenoweth Live
11. Eat a fish/shrimp taco
12. Visit San Francisco
13. Have a beach vacation at one of those beach houses you see on tv/the movies.
14. Go to Crate and Barrel - not just online, an actual store.
15. If I'm going to continue living in the states, I'd like to live somewhere that has a Trader Joe's. With wine. Because in this state they don't have wine.

Indian Horse by Richard Wagamese
Flygirl by Sherri L. Smith
Orphan Train by Christina Baker Kline
Lamb: The Gospel According to Biff, Christ's Childhood Pal by Christopher Moore
The Poisonwood Bible by Barbara Kingsolver
Great House by Nicole Krauss
The Twin by Gerbrand Bakker
Falling Backwards by Jann Arden
All That Matters by Wayson Choy
The Virgin Cure by Ami McKay
Happier at Home by Gretchen Rubin
Wishin' and Hopin' by Wally Lamb
Toby: A Man by Todd Babiak
The Sentimentalists by Johanna Skibsrud
Annabel by Kathleen Winter
The Bishop's Man by Linden MacIntyre
After Green Gables: L.M. Montgomery's Letters to Ephraim Weber, 1916-1941
The Jade Peony by Wayson Choy
Room by Emma Donoghue
Cool Water by Dianne Warren
The Hour I First Believed by Wally Lamb (My Dad had just started it before he died.)
February by Lisa Moore
The Last Time They Met by Anita Shreve
After the Falls by Catherine Gildiner
Mistress Pat by LM Montgomery
Pat of Silverbush by LM Montgomery
A Death in the Family by James Agee
The Book of Negroes by Lawrence Hill
Too Close to the Falls by Catherine Gildiner
The Franchise Affair by Josephine Tey
Through Black Spruce by Joseph Boyden
Never Let Me Go by Kazuo Ishiguro
The Maytrees by Annie Dillard
The History of Love by Nichole Krauss
The Story of Forgetting by Stefan Merrill Block